The Halls of Residence at the Białystok University of Technology

The Halls of Residence at the  Bialystok University of technology invite  all the  students, including foreign students (ERASMUS+)  to use  the housing offer. The offer is addressed to people, who want to solve the problem with  living in a city,  in an easy and inexpensive way. It’s a great alternative to private rooms and apartments.

The residential segment consists of four rooms. It  has a shared bathroom, with two sinks, a shower and a toilet.

There is a kitchen on each floor fitted with 2 cookers, a sink and a table. People using the kitchen are obliged to clean up after the cooking and to take all equipment and food to their rooms. ATTENTION! Equipment and food left in a kitchen will be removed.

Laundry room and a drying room

There is a laundry room and a drying room on each. Laundry rooms are available for free, the hall of residence do not provide laundry rooms with laundry detergent.

ATTENTION! The administration of the hall is not materially responsible for stolen or lost items.

We also offer our inhabitants place to rest after classes.

Is situated on the ground floor of the Hall of Residence nº3. It is equipped with billiard table and foosball.

The residential segment consists of four rooms, and shared bathroom, which includes two sinks, a shower and a toilet.

On each floor there is a kitchen,  which includes  3 gas stoves, a sink and a table; laundry and drying room. The  Laundry room is available only to the inhabitants of the dormitory.

Attention! The dormitory does not provide with laundry detergent.

On the ground floor at the Hall of Residence Nr 2 is situated student Club “Relax”. Where students can enjoy their  free time. The Club is equipped with TV, billiard table, Ping-Pong table,  foosball, and darts, and free WIFI connection.

The Hall of Residence Nr.2 „BETA”, at the Białystok University of Technology

We accept payment by credit card 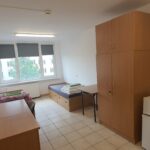 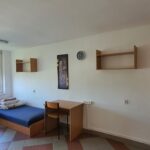 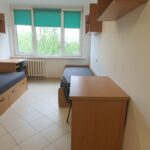 The Hall of Residence GAMMA

The Hall of Residence GAMMA

The residential segment consists of four rooms and a shared bathroom, which includes two sinks, a shower and a toilet.

On each floor there is a kitchen, equipped with gas stoves, a sink and a table.

There are also laundry rooms, drying rooms and bicycle storage rooms for use by residents.

On the ground floor of the Dormitory (room nr. 3) there is situated the Student Club „GAMMAJKA”, which is used to organize meetings and special events by the residents of the dorms.

THE HALL OF RESIDENCE No. 3 „GAMMA”  AT THE BIAŁYSTOCK UNIVERSITY OF TECHNOLOGY

The Hall of Residence DELTA

The Hall of Residence DELTA

Student rooms are equipped with standard furniture, incl.: beds – 1 or 2, wardrobe, kitchen cabinets, occasional table, desks, chairs, shelves, bookstands, night tables or commodes. The rooms do not have refrigerators or other household appliances. The residential segment consists of two rooms and a shared bathroom, which includes: a  sink, a mirror,  a shower and a toilet. Each room is equipped with sockets for internet access.

On each floor there is a l kitchen equipped with gas stoves, and a kitchen table; the laundry room, and the dryer.

Higher standard rooms are ment to be occupied by teaching staff, and includes extra equipment, such as refrigerator, and TV set.

STUDENT HOUSE 4 „DELTA” AT THE BIAŁOSTOCK UNIVERSITY OF TECHNOLOGY 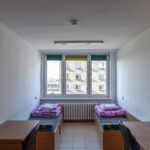 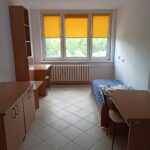 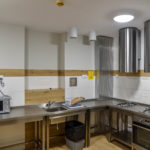 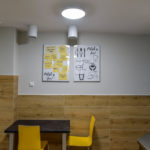 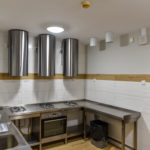 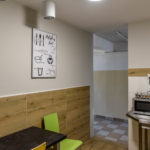 of the Rector of Bialystok University of Technology

The Regulations for the Student Residence Halls of Bialystok University of Technology in the wording set out in Appendix 1 to the Ordinance are implemented.

The amount of monthly fees for the accommodation in the Student Residence Halls of Bialystok University of Technology is established in accordance with the price list constituting Appendix 2 to the Ordinance.

I make the Deputy Chancellor of Bialystok University of Technology responsible for the proper implementation of this Ordinance.

The Ordinance shall enter into force on the date of its signature.